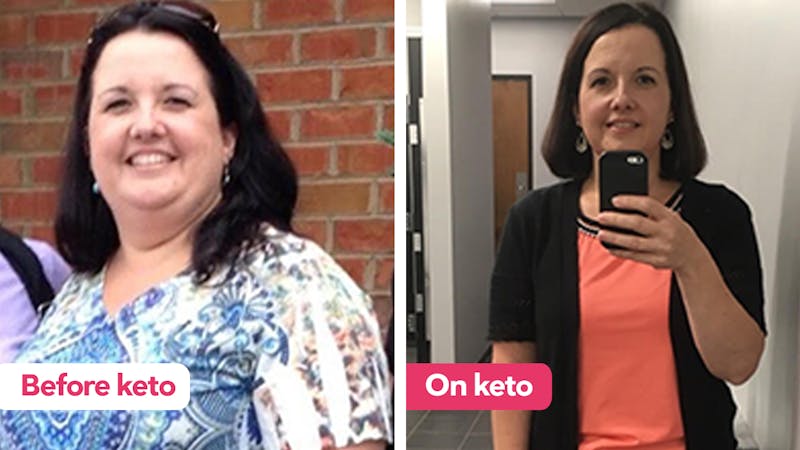 Debbie always struggled with her weight despite trying every diet under the sun. Occasionally she would shed some pounds before inevitably regaining all plus more.

In 2007 she tried the Atkins diet with success. She felt great and lost weight. But she ignored food quality and ate pre-packaged low-carb meals with suboptimal ingredients. She often strayed because the diet didn’t feel sustainable. In the end, she abandoned it altogether.

Over time she added more aches and pains to the list, and it was clear to her that her health was declining.

But in 2015, when she was about to turn 50, she decided to end the path she was on. She had just become a grandmother and wanted to turn her health around to be an active grandparent.

Given her previous success on low carb, she decided to give it another try.

At that point, she was morbidly obese, with high blood pressure and low energy. Given her previous success on low carb, she decided to give it another try.

Despite her previous experience, she hadn’t dug into the science of low carb. The community had also changed, and there were more opportunities to connect with other low-carb enthusiasts online.

When scouring the internet she came across Kristie Sullivan in a Facebook group. Kristie’s comments about low-carb science resonated with her and encouraged her to dive into strict keto.

Debbie began feeling better and losing weight immediately. Her blood pressure started normalizing. “Within one year of going keto, I was prescription-free for the first time in decades!” she explains.

Her blood work also came back looking fantastic! She no longer had any nutritional deficiencies, whereas before, her iron, vitamin D, and potassium were low.

Today she is 90 pounds (41 kilos) lighter. She loves that keto is all about listening to the body and trusting that it will do its thing. She feels that her body is very happy where it is.

The results were so impressive that when she visited her physician, she asked Debbie what she was doing! After Debbie explained it to her, she simply stated “That’s amazing! Fat has gotten a bad wrap. I think sugar is the one we need to watch.”

When Debbie started keto, she ate three meals a day. Over time, as her hunger subsided, she started incorporating 16:8 fasting.

When Debbie started keto, she ate three meals a day. Over time, as her hunger subsided, she started incorporating 16:8 fasting. Nowadays, she may occasionally wake up hungry, and then she’ll cook a meal.

But those days seem to have become increasingly rare since she embarked on Diet Doctor’s Weight Loss for Good program earlier this year. The program has also helped her lose a bit more weight after a long plateau.

Even though she enjoys cooking and trying new recipes, she usually eats simply – assembling meat, healthy fat, and sometimes a vegetable for lunch and dinner. You can see some of her favorite meals below.

Although Debbie’s family doesn’t eat keto, they still think that it’s an enjoyable way of eating, and they’re very supportive of her lifestyle. Most of the time, she simply cooks an extra side for them.

Additionally, Debbie never exercised when she was losing weight. For that reason, she doesn’t think that it’s necessary for weight loss. But over time, as she’s gotten healthier with keto, she finds that she wants to move more.

You can learn more about Debbie by joining the Diet Doctor Facebook group. She’s a moderator in the group and posts regularly.

Thanks for sharing your story, Debbie! I appreciate your message of educating yourself and keeping it simple. Since our motto at Diet Doctor is making low-carb simple, we agree! Keep up the great work!

Ready to lose the weight for good?

Our 10-week program helps you lose weight healthily and sustainably.

Do you have a success story you want to share on this blog? Send it (photos appreciated) to success@dietdoctor.com, and please let us know if it’s OK to publish your photo and name or if you’d rather remain anonymous. It would also be greatly appreciated if you shared what you eat on a typical day, whether you fast etc. More information:

Sure Ways to Boost Your Immunity, According to Dr. Fauci

How low carb is keto?

Are you losing fat or bulking? I’ve got you covered with both options for overni…

10 Foods That May Be Triggering Your Headaches

Sure Ways to Boost Your Immunity, According to Dr. Fauci

7 Ways to Make Oatmeal for a Flat Belly

#FoodshowcaseFriday BLUEBERRIES! if you watched my stories yesterday, you would…